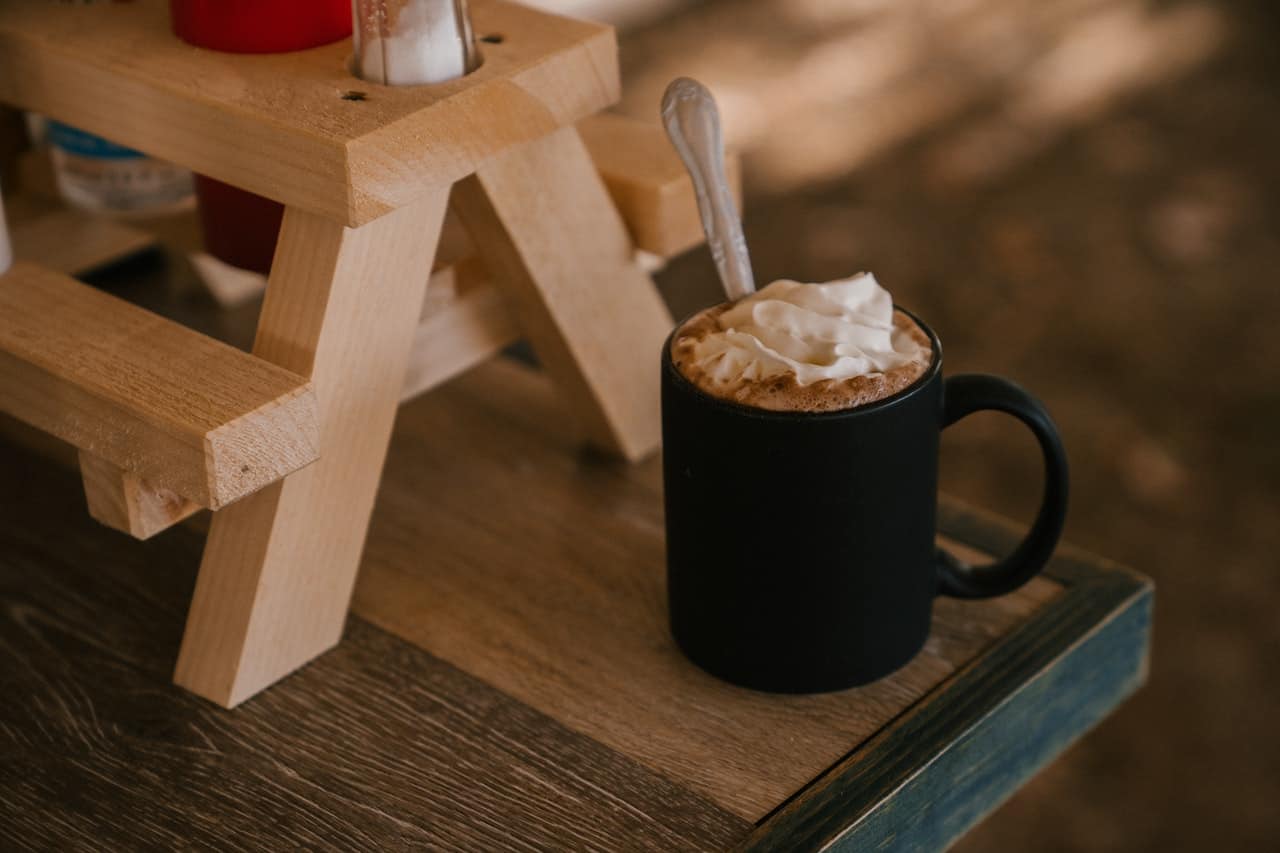 Ah, mornings…you just gotta love them (I actually detest them before my coffee convinces me otherwise).

But is it only me that needs my morning dose of coffee to function properly? A cup enables me to open my eyes and keep them that way.

Some prefer theirs dark and strong. Other’s version, on the other hand, is sweet and creamy.

It’s the pineapple on pizza discussion all over again (insert heavy sigh).

The addition of heavy whipping cream in coffee is not a matter of “can” because you most certainly “can” add it. But more so, it is a matter of why not and why haven’t you.

After all, drinking coffee is not just some activity that you and I casually perform. It is a lifestyle. And in this, you have to agree with me.

But before we drink our way into that point of our conversation, let us first discuss what whipped cream is.

Heavy whipping cream is made from the high fat that comes from fresh milk. The heavy cream rises above and can then be easily scraped off when fresh milk is left to stand.

It is also on the heavier side, with a fat content of 36-40%. Comparatively, cream varieties like whipping cream, light cream, and half-and-half have less fat.

How/What Whipping Cream is Made of

The raw cream scraped off at the top of fresh milk undergoes pasteurization. The process revolves around applying high pressures and heat to remove the pathogens, which then improve the heavy cream’s shelf life and stability.

Consequently, further churring the whipped cream results in butter. The fluid that remains in this process is now what we call buttermilk.

Aside from all its split personalities, heavy whipping cream as it is also rich in choline, the minerals calcium and phosphorus, and fat-soluble vitamins. Some of the latter include:

How Does it Affect Coffee?

Just so we’re clear, there is no one right and above-all-else kind of way in the art of making and drinking coffee.

So when that time comes that you are finally open to trying different things out, why not start by adding heavy whipping cream to coffee.

Some days are dark, and most are bright. Using heavy whipping cream in your coffee can be that complementing factor that can make both your day and coffee taste sweeter and fuller.

In addition, heavy cream can also change the texture of your coffee, making it thicker and smoother. It can even be a stand-alone breakfast if you don’t have the time to cook because an ounce of it already contains about a hundred calories.

But keep in mind how much you’re using because, as I’ve said, that’s a lot of calories in an ounce.

How Does Heavy Whipping Cream In Coffee Tastes?

If you’re wondering if that authentic taste we are all after in coffee beans will dilute into nothing, it will not — the opposite, actually. Using heavy whipping cream in coffee intensifies it.

True, heavy whipping cream has such a dense exterior, but it has a very minimal flavour. If anything, it’s just a topping!

Still, adding heavy whipping cream to coffee will give you a different taste. The bitterness, for one, is influenced without compromising that particular sought-after taste of coffee.

Is Heavy Whipping Cream In Coffee Bad For Lactose Intolerants?

Contrary to popular belief, you do not have to avoid all dairy products if you are lactose intolerant. In fact, there are several dairy products, like heavy whipping cream that are naturally low in lactose that you wouldn’t have any problems using them.

Just keep in mind that moderation, control, and experimentation are the keys to finding the best product for you.

So consider heavy whipping cream at the top of your list because there are only 0.5 grams of lactose in just half an ounce. And darling, that is not enough lactose for your tummy to complain.

Due to its high-fat and low-carb content, heavy whipping cream is a go-to ingredient for many Keto recipes (yep, not just coffee).

You can start by trying a whipped keto mocha drink. All you have to do to achieve this coffee version is to replace both the milk with heavy whipping cream and the granulated sugar with stevia.

Coffee Creamer, Half and Half, and Heavy Whipping Cream: Breaking Things Down

To an ordinary person, there really isn’t much difference.

They are all pale in colour, you put the chosen one in the concoction, and that’s it — coffee.

The substitute for milk, and the other two under discussion and trial, coffee creamer is typically the lactose intolerant’s best friend.

Most coffee creamers basically zero dairy and all sugar. Some come in the form of a dense syrup, while others are powdered.

It also has a considerably less amount of fat, to the point that it’s almost non-existent depending on the brand than the other two, at only about a gram in a tablespoon.

As for the caloric content, it is generally around 20 per tablespoon.

As the name suggests, half-and-half is part cream and part milk. The ratio of these two components is equal, as, in half and half, is 50:50.

Half-and-half is just a diluted heavy cream and thickened milk.

If you find milk too thin and heavy whipping cream too thick, half-and-half may be the right coffee addition for you.

I personally like going for a half-and-half. It is still basically milk since it’s made out of it, but with a richer flavour than heavy cream.

Typically, it contains about 10% fat and with even lighter versions if you have the time to shop.

Here’s a breakdown: you take milk, boil it, cool it, and it produces this thick cream on top, and that’s the heavy whipping cream process.

So yes, you most definitely can make your own in the comforts of your home. You can also create half-and-half from it.

When it comes to fat, though, it has about 35%, which is already considered a high content. Heavy whipping cream in coffee is seen as a weight loss regimen, especially by people on a keto diet.

Other uses include thickening sauces, substituting for whipped cream, and making butter.

Have you ever heard of the word “frappe”? If yes, then you probably heard of the argument about this drink not being considered coffee.

Now, some might argue that a frappé is not a “coffee” because they are usually not made with it. They are, instead, made using hot chocolates, teas, juices, and other flavorful drinks.

Historically and traditionally, though, a frappé is made with coffee. I mean, it is a famous Greek iced coffee that is a blend of heavy whipping cream, sweetener, syrup, and of course, coffee.

But ironically enough, the word is not of Greek origin but of the French verb frapper meaning to beat, knock, or slap.

The origin gives away how the drink is done: blended, beaten, or shaken to produce an iced beverage with a foamy and tasty flavor.

Today, it is mostly associated with the Greek instant coffee version. But the espresso version has also been welcomed with open arms for decades now.

The latter is done by shaking a double espresso with white sugar, then pouring it into a glass.

How Much Heavy Whipping Cream In Coffee Is Enough?

What combination are you going for? A Frappuccino, a Vietnamese coffee, an Irish one, a cold brew, a dark roast perhaps?

You also have to consider your personal taste — how sweet, how frothy, how creamy, how thick you like your coffee.

Most of all, the health-wise factor. How much will your dietary intake allow?

First and foremost, curdling is associated with the lumping of coffee. Ever notice those lumps and curds floating around?

That’s curdling, and it affects the flavor of the coffee.

And to answer the question — it depends.

If you’ve had heavy whipping cream in coffee more than once, chances are you have noticed that it sometimes curdles, and there are also times that it just doesn’t.

There are several factors to explain that. It can be because of the acidity of your coffee blend, the ratio of your coffee to your heavy cream, the temperature, how much you stir, and many more.

But above anything else, you might want to check the freshness of your cream. The ‘geriatric’ ones easily and quickly curdle.

Curdling sure is avoidable.

Make sure that your store-bought heavy whipping cream is not closing in on its expiry date. Better yet, forego the artificial and just make your own at home.

Moreover, as a coffee lover, you must know that drinking it fresh and not letting it get cold is necessary. Since this is also a factor for curdling, drink up now!

And don’t mistake lumps from the cream film. Simply stirring will get rid of the film while lumps.

However, it is essential to note that this cream film does not go away. It will float on top of your coffee once the liquid goes untouched for some time.

The phrase, “the art of making coffee” sounds great. The reason is that coffee-making is an art that requires not much and no one ruling, just that we put our hearts and attention to creating it.

It does not matter how your way differs from mine.

Besides, a lot of things in life are acquired tastes, wouldn’t you say so? And most of the time, what was seemingly distasteful in the beginning, most often than not, turns into something that we eventually love.

No one’s forcing anyone to all of a sudden be a heavy whipping cream in coffee fanatic. All I’m saying is, that a change can be good from time to time.

Think of it as an extra condiment!

But what says you, how would you like to take your coffee today?